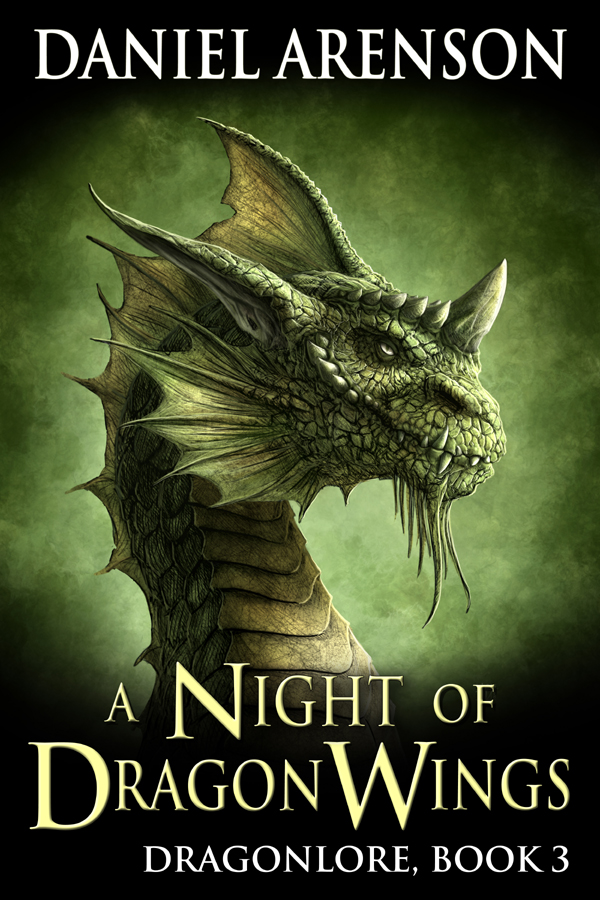 Dragonlore, the bestselling fantasy series beginning with A Dawn of Dragonfire, concludes with a tale of blood, steel, and flame.

Among the ruins, Requiem's dragons plan a desperate attack. To survive, they must strike Solina at the heart of her desert empire. Yet as Requiem rallies, Solina raises her cruelest champions yet.

The nephilim, the spawn of demons and their mortal brides, have languished underground for epochs. Giants of rotted flesh, razor fangs, and clawed wings, they crave to crush the world that imprisoned them. When Queen Solina frees this unholy legion, the nephilim marshal under her banners... and swarm into Requiem.

Requiem's light dims. Her hope is but a flicker in an endless night. As ancient evil engulfs the world, Requiem's dragons roar, blow their fire, and fly to their last stand. 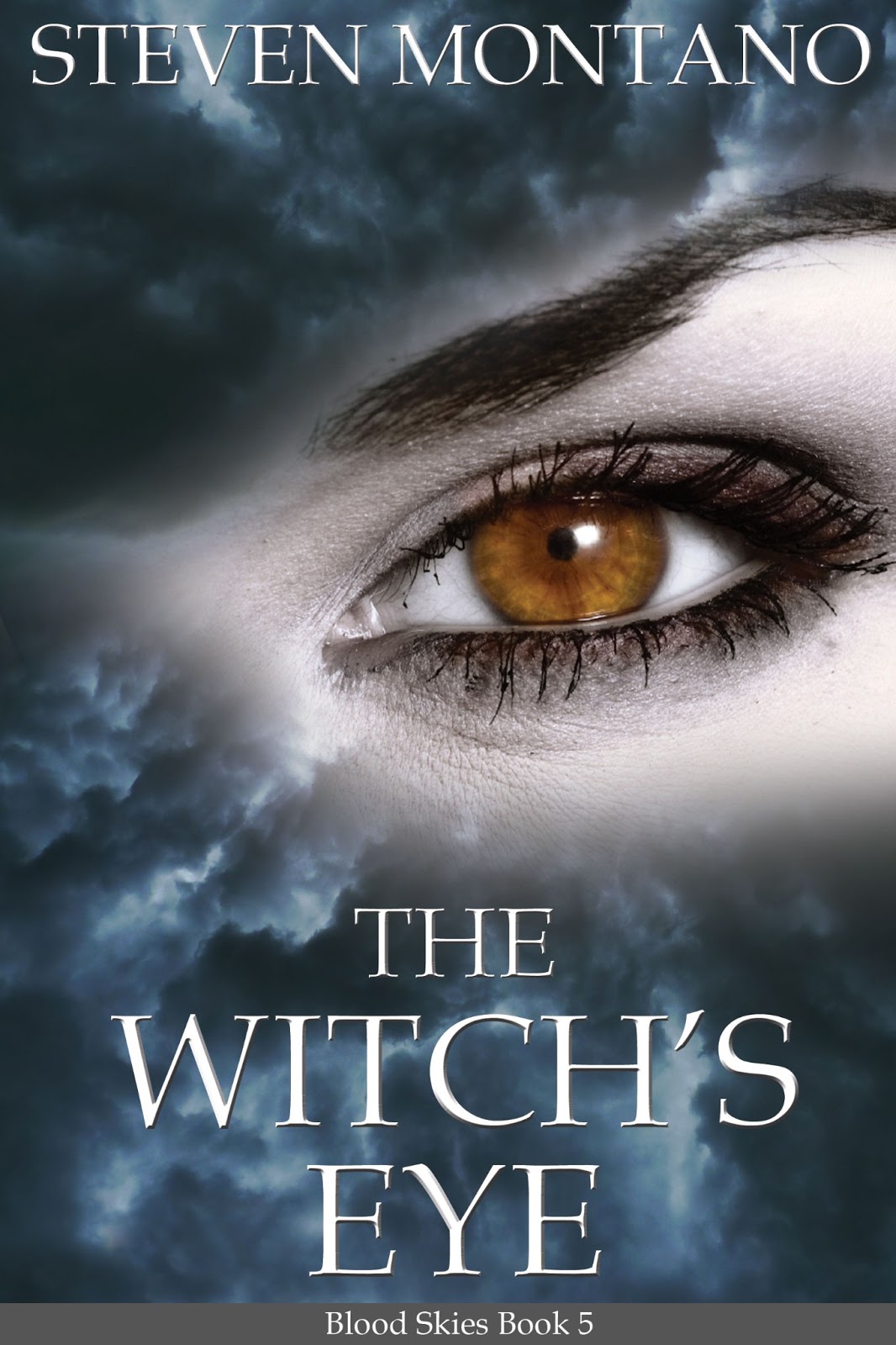 A new evil is born.

The Ebon Cities have created a deadly new breed of undead called the Witchborn, whose very existence spells doom for the entire continent.

To make matters worse, a nihilist cult called the Black Circle has learned of the Witch’s Eye, the source of the Witchborn virus and an item capable of opening a portal to The Black.

Eric Cross’s scattered and war-weary team must find the Eye before it’s too late.  With the aid of some unlikely allies, the mercenaries will fight their way across the wastelands and challenge the horrors at the edge of oblivion.

And before the battle is won Cross and his team will make the ultimate sacrifice, and face one of their own…
Return to the world After The Black in Book 5 of the BLOOD SKIES saga! 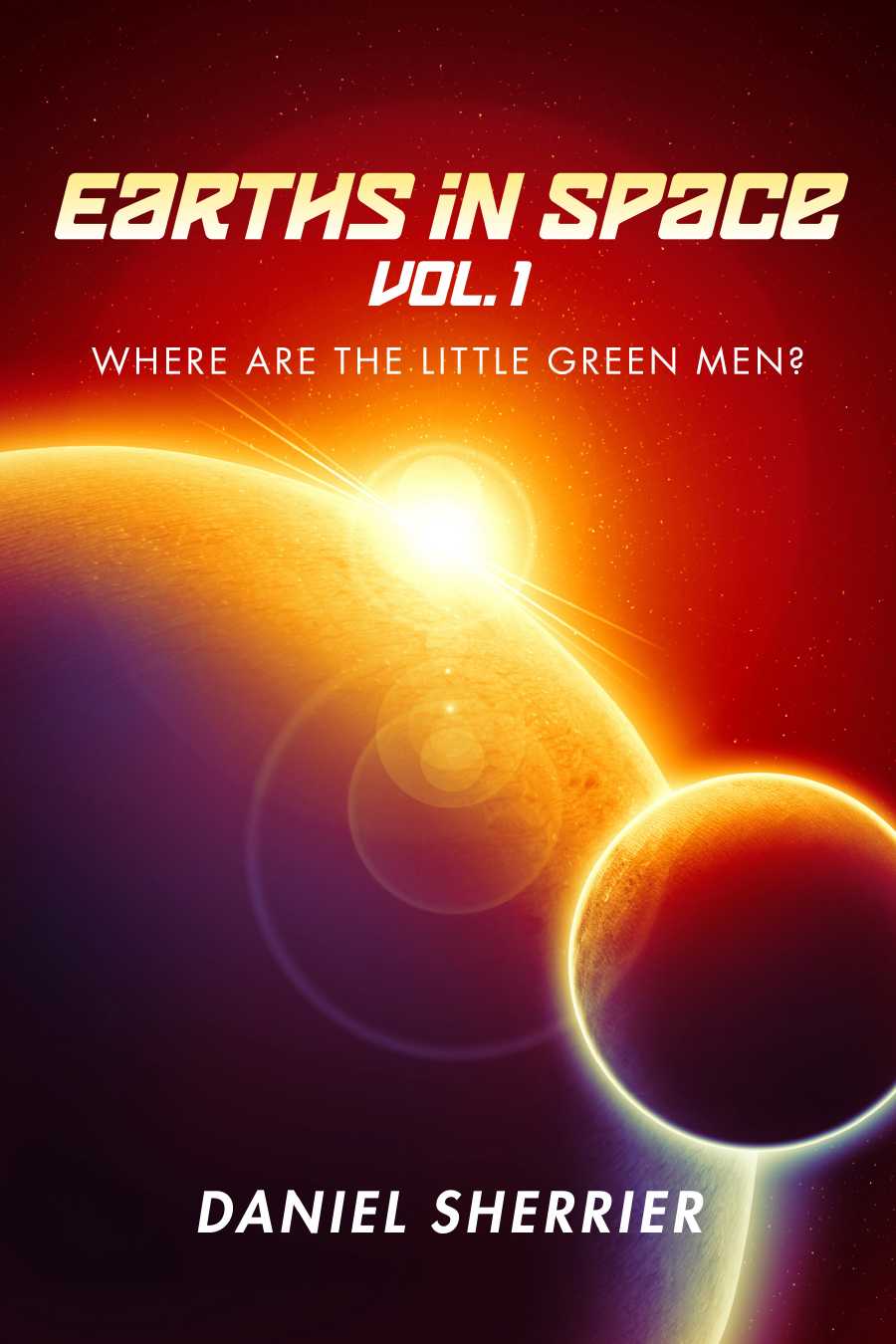 There are no aliens, but the universe is full of people. Other Earths are out there. Unique individuals populate each one, making unique decisions that lead to unique civilizations. Amena Wharry wants to visit each one. She has no idea what she’s getting into. She can’t wait to find out.

Volume 1: Where Are the Little Green Men? contains the first two novellas in this episodic science fiction series. Amena and her space-faring team of explorers learn that life out there is much like life here, and just as unusual. In the first episode, "Liberty or Death," the team faces hi-tech tyrants who pose as gods. Then, in "The End of an Earth," they travel to a world that has less time than they think.

Earths in Space. They’re already out there. You just haven’t discovered them yet. 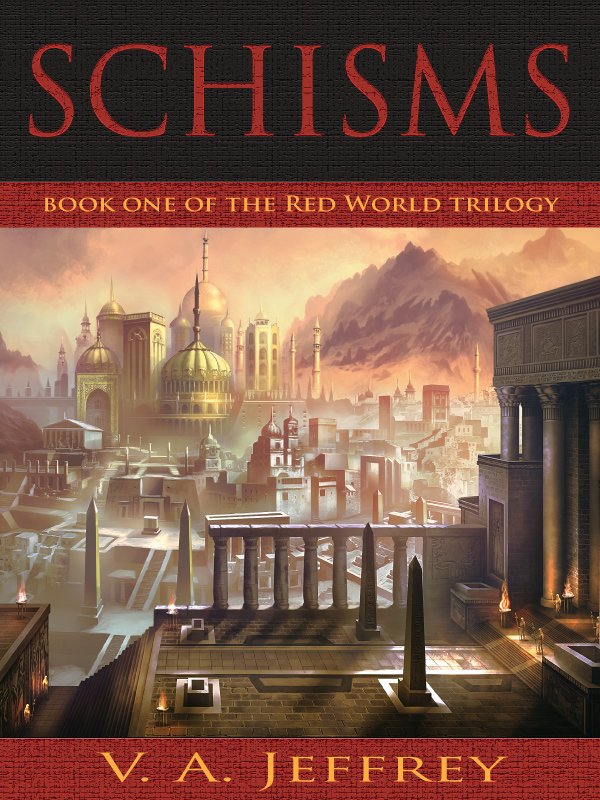 The land of Hybron, once the cultural center of the Red Planet, has fallen into an abyss of political and religious strife that have kept it embroiled in conflict. It has floundered in a dark age for centuries, the former grand kingdom falling into a collection of city-states. An ancient prophecy has reappeared, a prophecy that promises to deliver them from the corruption and increasing violence that permeates the land. However, there are those who have their own plans and “savior prophecies” only get in the way of the more pragmatic concerns of acquiring power.

The ancient capital, Assenna, has been in ruins for many ages and the line of kings that ruled from it are nearly forgotten. The very words, Red Kings, have become a curse and it is forbidden to even speak of them but it is precisely the blood of this kingly line, it was foretold, that would rule Hybron again and raise it up to its former glory. The Ainash priesthood, a powerful and ruthless faction in Jhis have fallen in power after a barbarian warrior has overrun the city-states, making himself king of the land. Under his rule Hybron has once again been reunited under one power. Is he, a wild tribesman of the desert, the future Red King of prophecy? As the kingdom remains embroiled in corruption and violence it does not seem so and his queen, a devout woman of the Aishanna-La has borne him no heirs. She has her own schemes that put her at odds with everyone at court: the priesthood, who seek to regain power and the king, who plans to carve out a great name for himself in the world. The queen becomes embroiled in a controversy that will have long-reaching effects on the fate of the kingdom and her own. 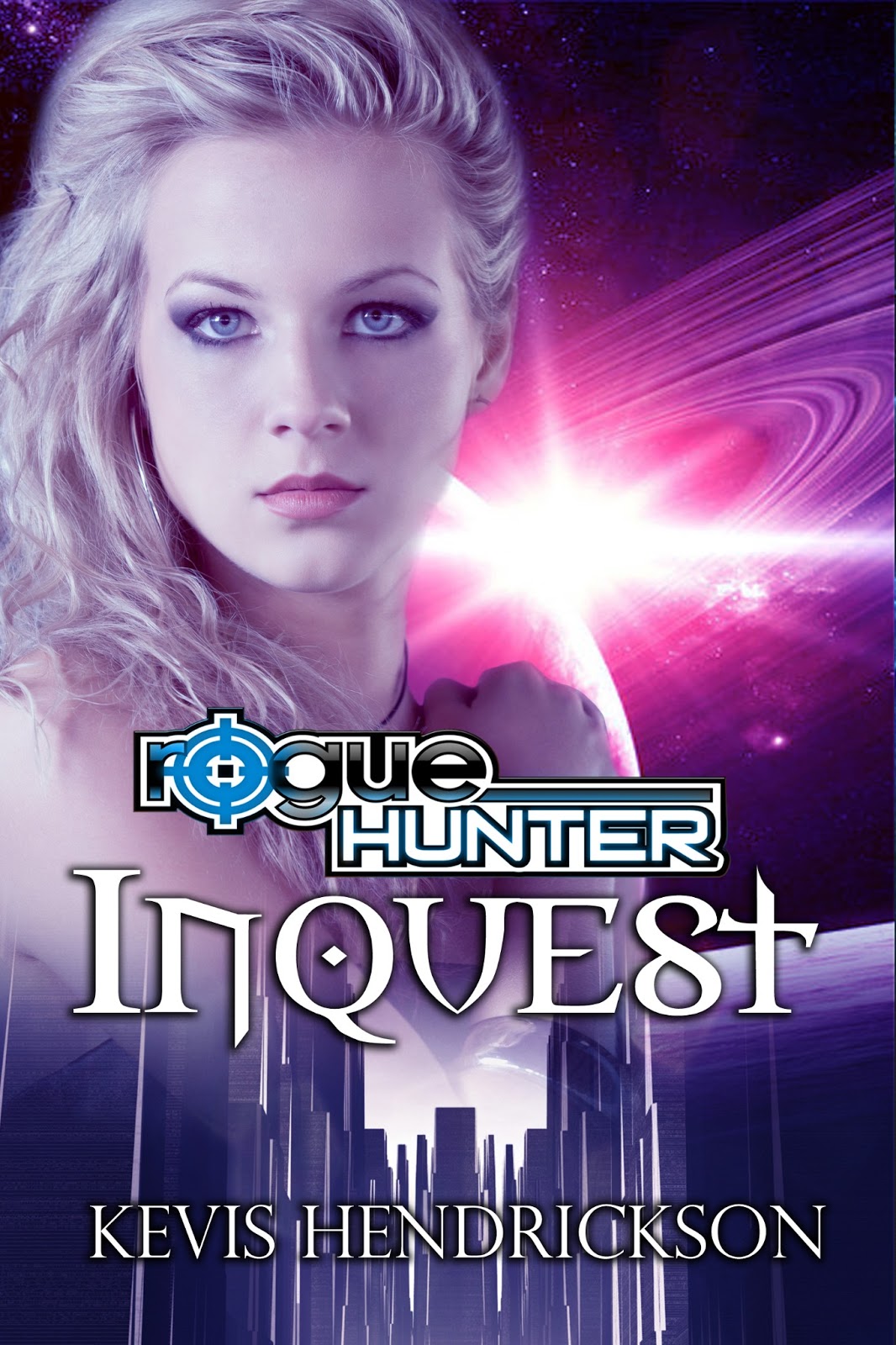 Fearing retribution from ruthless gangsters over an unsettled debt, intergalactic bounty hunter Zyra Zanr ventures to a distant world to collect the reward for Boris Skringler, a notorious terrorist, who has been sentenced to death by political rivals of the InterGalactic Alliance. When she fails to secure his release, she decides to break him out of prison. Zyra soon finds herself an unwilling participant in events that lead to a climactic showdown between the most powerful worlds in the galaxy.

Torn between her desperation to rid herself of the threats to her life and her guilt in agitating the conflict between two galactic superpowers, Zyra is horrified to learn that the lives of an entire world of people hinge on her ability to return Skringler to his captors. However, her distrust of Skringler gives way to lust, unraveling her plans. Will Zyra give into her passion and allow Skringler to go free? Or will she surrender him to her enemies to stop an impending war? The fate of billions depend on whether she chooses life for a killer or the death of her lover. 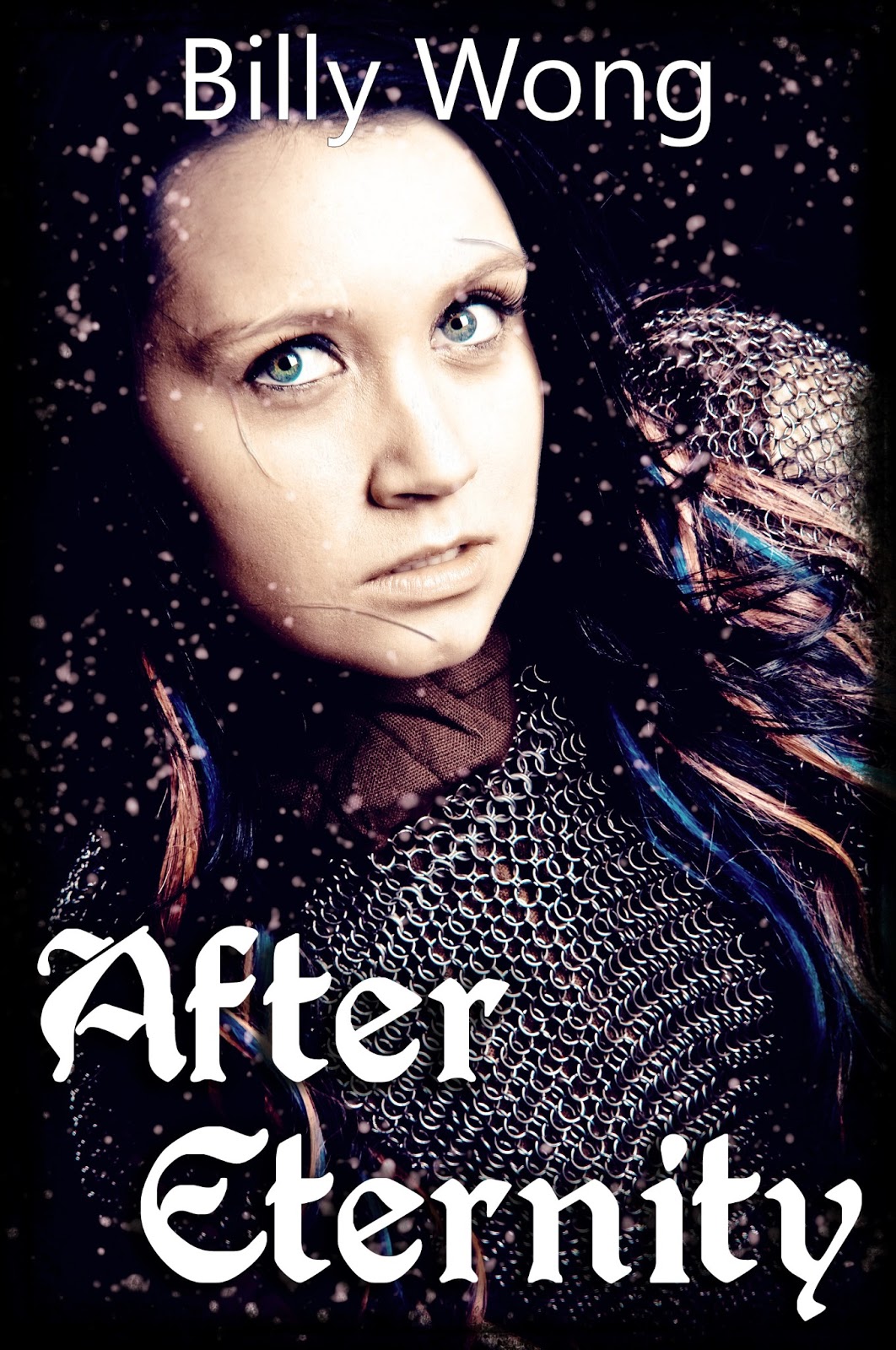 Legendary warrior Rose thought she could get at least some rest playing bodyguard for her merchant friend Alex. But when they inadvertently revive an ancient hero and learn of an apocalyptic prophecy, Rose must travel to a haunted kingdom to battle a nation-killing demon and stop the event known as the Disaster. 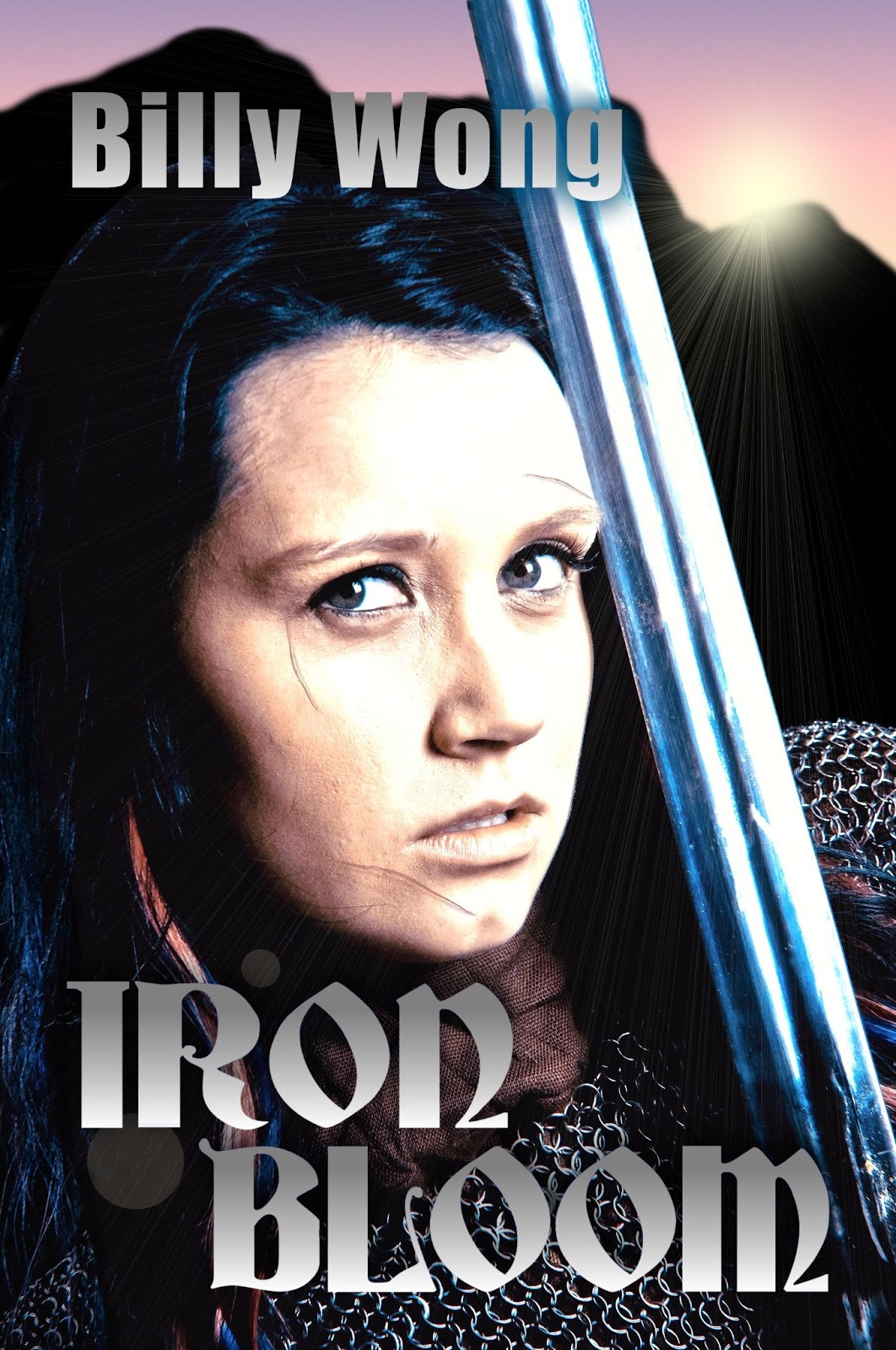 Journey back to a time of epic legends with the tale of Rose, a mighty warrior torn between the power of the sword and her longing for a peaceful life.

A young woman with a kind heart and extraordinary constitution, Rose becomes a warrior to better the world. Despite the wealth and fame she wins as one of the greatest champions of her time, the bloody reality of her new life is nothing like her ideal dream. She yearns for a chance to escape the violence.

She finds that chance in Ethan, the leader of an altruistic pacifist group. But when a barbarian horde invades their kingdom, Rose knows that she can make a difference by taking up her sword again. Will her need to protect her homeland cost her the man she loves?

Dan and his family awake one day in a world where everyone is dead but no evidence points to a cause. Initial searches for survivors yield nothing and, in panic, the family turns their house into a stronghold. Eventually, they find Laura, a survivor who wins their hearts...and leads Dan to temptation. Laura describes her panicking encounter with strange entities which Dan recognizes in his childhood hallucinations. He forces himself to find and confront them: An older power controls the fate of men.

A few selected will face the ultimate quest: a painful genetic transformation and work toward the rebirth of a new human race, or oblivion and death in isolation.

On a clear night, the iced countryside of Overland shimmers in deep dark purples as it absorbs the light from the stars overhead. But this night, everything is dark as onyx; the occasional gloomy twinkle playing peek-a-boo with the eventide.

The currents of the atmosphere sense a disturbance, shifting and shivering as if in expectation of some cyclopean storm. Intruding in the peaceful song of the frozen ebony sleep comes a sweet, but perplexing hum.

At once it is as if the things of nature recognize the color of the exciting hum. The snow covered hills begin to glow warmly, a rhapsody of inner light coating the frozen tundra. In moments the air snaps to attention, exuding the scent of ancient virgin forests untouched by fae. A mix of pine, cedar and oak, fighting to dominate, release their heady perfume into the ozone.

An obscurity of bright and colorful streaks stream from over the mountains miles away. Red blending into purple; purple blending into indigo; indigo into pink evinces a masterpiece of surrealism.

If you stopped time in that instant before the ancient one was impelled by the Realm of Clouds to reach out and taste fate, you would see an amazing sight. If you hovered in the face of the masterpiece of light and color, you would behold the sorrowful expression of an exquisite fairy. Long red hair flowed out behind her as she flies. Drawing your attention would be the reddest lips and the most beautiful blue eyes. Rimming those eyes, which are at once clear and open but deep and dark as well, were the darkest lashes. The whisper of a crystalline tear hovered at the edges of those nymph eyes; the tears stretching out with the speed at which she flew.

This paragon of beauty is Princess Yaliza, daughter of Vodianyk, High King of All You See. 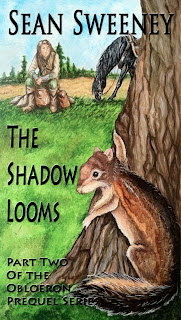 A year has passed since Krampel Paddymeyer, Lutricia Juniper and Radamuck Rosar met, and the trio has grown into a routine. After spending time in a seaside town, the call for help goes up: Corsairs have attacked Oak Flats, the home of the peaceful squirrellen.

Astride their newly-acquired steeds, the trio rush to the squirrellen’s aid. It is there that they discover that the squirrellen are needed for a project—a project that could change the face of the southlands should it grow to fruition. Krampel and the others must seek answers from the Valley of the Wizards before the path winds further toward the man behind it all.

THE SHADOW LOOMS is the second book in the Obloeron prequel series, following THE RISE OF THE DARK FALCON.